sometimes it’s a really good idea to totally ignore what mom tells you to do! 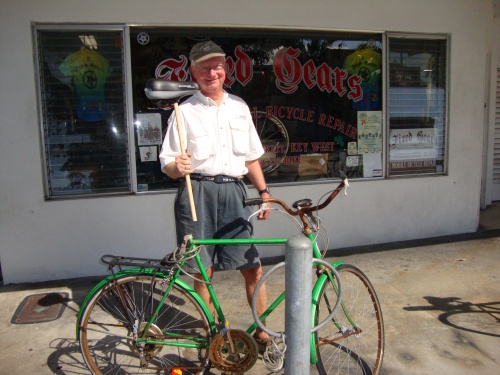 I really wish i remembered this gentleman’s name. He arrived at the shop with his seat mounted to a wooden dowel on his bicycle because he needed a new seat post! The dowel was his only available alternative to walking. Well done!

As awesomely great as that story was, it was only a small part of the story of a man and his bicycle. Many years ago, his mother gave him money to buy a suit. And did he listen? No he didn’t! ! No, he went out and spent the money on a brand new bicycle! And still rides it to this day. His words were something like, “If i had bought that suit, it’d be long gone by now, but I still have my bicycle.”

taking conch cruiser to a new level of rust

Tomas dropped by the other day with a major chain problem and a bleeding thumb that prolly needed minor surgery. We treated the chain and released the bicycle healthy and ready to cruise; but not before I shot this photo of Tomas, his bicycle and his rusty key. Yep. I have seen it all. Rusted headsets, rusty handlebars, completely rusted fenders, rusted out frames, chains and locks….and now…a rusty key. The climate here is brutal on bicycles.