We are spending a second night at Avalanche Creek Campground to explore more of the park! It is far too beautiful here to just pass through! And that’s the theme of our whole trip! 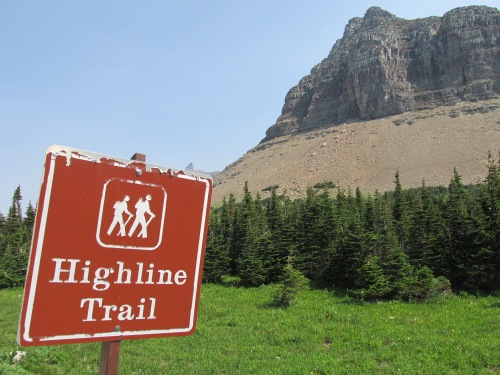 We took a free National Park Service  shuttle bus back up to Logan Pass. We planned to just walk down the Highline Trail a little bit.

Those are not patches of snow…..they are mountain goats chilaxin’ in the shade! The temps were in the 90’s during the middle of the day. We can see snow but still haven’t escaped the heat of Key West. 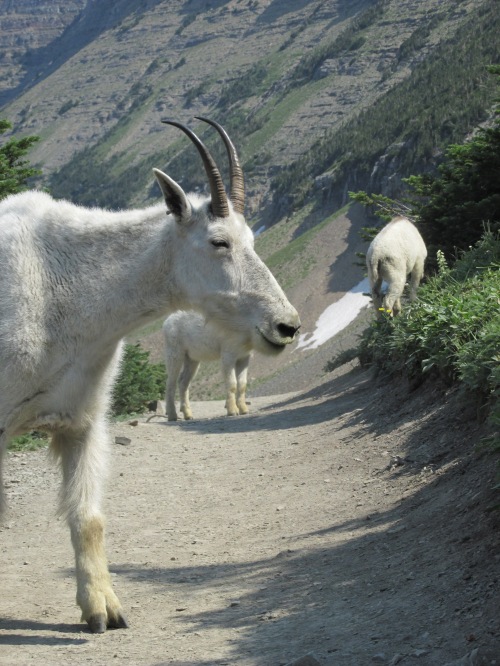 Barely 20 minutes into the trail we were stopped by a mama goat making it very clear not to get any closer to the kids at play. The standoff only lasted about 10 minutes and was quite entertaining.  We were then allowed safe passage.

Safe passage being a relative term!  There was a bit of a drop off on the narrow trail! Down below is the Going to the Sun Road. Unreal to be there. A week earlier a hiker and a grizzly almost walked into each other on the narrow trail and made it to the front page of the newspaper!

Looking back at Logan Pass. The views are amazing!!! A grand scale to behold. Absolutely fantastic!

Below you can follow the road and above is the trail. We each had a water bottle and a few snacks. We  found out at the trailhead that the 12mile trail ended at “The Loop”  where we could take the park shuttle back to our campsite. Good idea? Irresponsible? Was it even possible to turn back and ignore more of this scenery?!?!

Yeah, the trail was this ridiculously awesome! I had some water purifying tablets in my first aid kit and an unsure knee. Hiking 12 miles with no trekking poles at the beginning of a 2,500 mile bicycle tour wasn’t the safest idea…but how could we resist with views like that?!?! Why would we resist!?!?

SNOW! We were not mad at each other, but somehow a snowball fight may have happened. In August!

Snow! Not just for distant peaks!

Kerry getting in one last throw.

The trail truly climbed to Heaven! The scale is inconceivable!

This video gives a better idea of the scale! Wow! 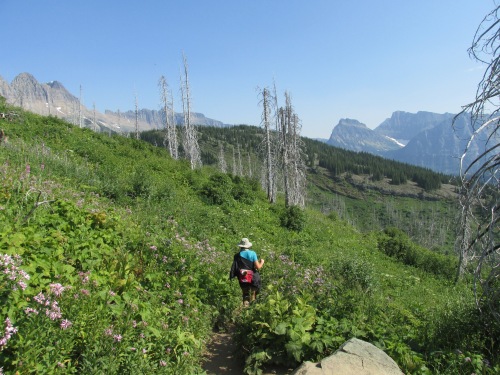 Eventually we did descend. The hillside at the end of the trail had burned and many wildflowers enjoyed the lack of shade; we however, would have loved some shade! That sun was really beating on us.

We made it back to the hiker/biker site tired and happy. Knees still felt great and those views were still fresh in our minds.

Tomorrow we bike out of the park and make our way towards Missoula.
8/8/14 Glacier National Park to Columbia Falls